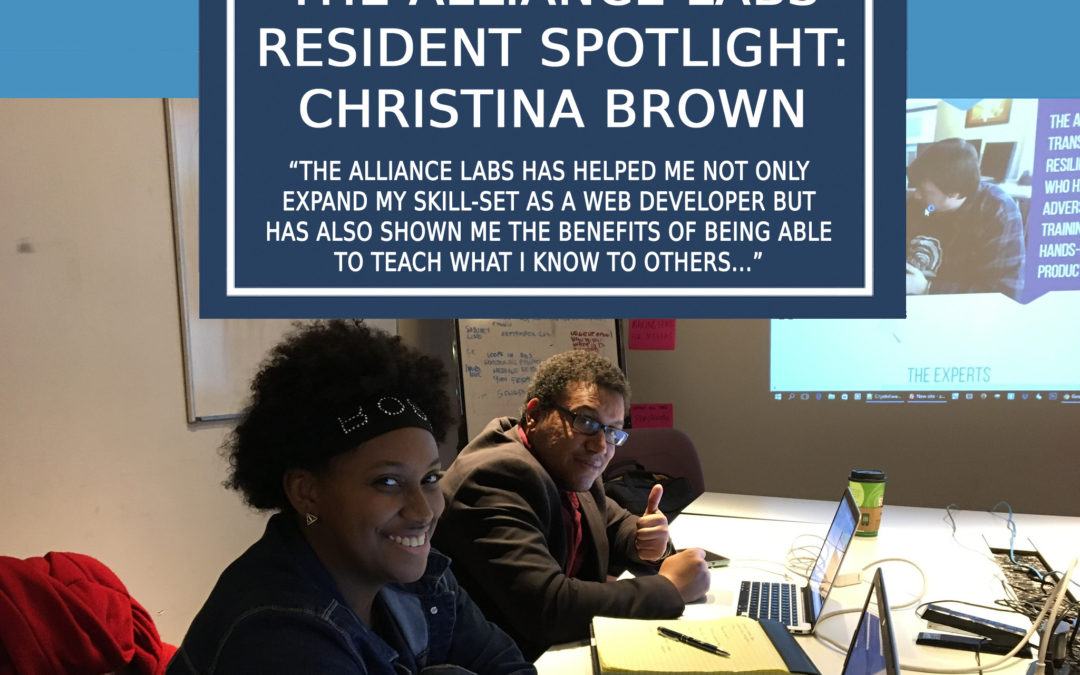 The Resident program at The Alliance Labs was designed to create opportunities for Chicago’s dedicated and talented young adults who have overcome extraordinary adversity and aspire to greatness and leadership through careers in technology. These future leaders are given real-world, employable skills that are practiced, challenged and perfected through the work The Alliance Labs does for its valued clients. One of the program’s current residents is Christina Brown.

Tell us a bit about yourself

I was born and raised in Chicago, though I currently live in Evergreen Park. I’ve always had a passion for technology and web design for as long as I can remember. I have an Associate’s Degree in Web Graphic Design from DeVry University though most of the time between obtaining that degree and finding The Alliance Labs had dimmed my passion through lack of success in finding a job that matched my skills.

What led you to The Alliance Labs Resident program?

Before I found out about The Alliance Labs, I found out about i.c.stars from an alum. While in i.c.stars, I first met Jon and Andrew at a small networking event that i.c.stars does for its interns. Near the end of my time in i.c, The Alliance Labs premiered a series of workshops called ‘Zombie Chase’ in which basics of web design were taught and weekly assignments were given. If the assignments and workshops were missed, you would eventually be ‘eaten’ by the zombies. I passed the classes and after graduating i.c., was given the opportunity to become a resident of the Alliance Labs. I took the opportunity and have been glad that I did ever since.

What have you been involved in so far?

Outside of doing projects for Alliance, there’s the weekly Code Review meetings in which other residents and myself can show off different projects we’ve been working on either for ourselves or for clients in front of each other. By doing so, we get critiqued on how we might do something better and it’s also a way to get any help with the code on particular problems we might be having. I’ve also recently taken over teaching the ‘Zombie Chase’ classes to new residents, being the first resident to do so.

What are you hoping to learn from The Alliance Labs?

I’m hoping to gain as much knowledge and experience from The Alliance Labs as possible. But every new project, whether it’s mine to work on or something shown by one of the other residents, brings something new to learn. Not to mention the fact that the way web design is done is always changing. With both of those things in mind, I don’t think I’ll ever really run out of things to learn.

What Was Your Favorite Project?

I wouldn’t say I have a favorite project. Though I can say there’s one that comes close only because of the new knowledge I gained. It was the website for Temple Sholom, done in WordPress. The new knowledge was learning how to work with the ‘X’ theme and Cornerstone. There was also the added bonus of the (former) Creative Director, David, starting off an instructional video as if he was giving me details of a spy mission.

What are your plans after The Alliance Labs?

How has the Alliance Labs helped you build a career?

The Alliance Labs has helped me not only expand my skill-set as a web developer but has also shown me the benefits of being able to teach what I know to others, as a requirement of advancement in The Alliance Labs Residency program is to teach a workshop to the group. It’s also a huge resource with a helpful community free of judgment.